Poliomyelitis (from the Greek for grey matter and inflammation) also known as polio and infantile paralysis, is an acute viral infectious disease caused by one of three enteroviruses (there are more than 70):

At the time of viral infection, depending on the level of damage to each area of the body, a diagnostic name was given to the highest level of clinically evident nerve damage and classified as:-

Abortive polio: Symptoms do not include neurological symptoms. Mainly gastrointestinal upset and sore throat. Polio virus can be isolated from throat washings and stools. Interpretation: Polio virus growing in gut and throat lymphatic tissue and has not migrated to the spinal cord or brain. Post-polio syndrome would be unlikely in these cases because of the lack of neurological involvement to any appreciable extent.

Non-paralytic polio: Symptoms include neurological symptoms: Headache, stiff neck, muscle stiffness and spasms along with other muscular symptoms. Muscle strength testing at this time and after fever breaks does not show weakness, however, there is probably undetectable permanent nerve damage to some extent.

Paralytic polio: All of the above symptoms additional residual weakness and lingering paralysis of some muscles. This is further classified depending on the area of the body where the most damage was clinically evident.

Spinal polio: where the paralysis involves the skeletal muscles supplied by the spinal nerves.

Bulbar polio: where there is involvement of the muscles supplied by the cranial nerves. This type was seen in about 5 to 35% of cases (depending on the epidemic and led to problems of breathing, swallowing and speech).

Spinal/Bulbar polio: where both areas of the body were affected.

There are four stages to being a polio survivor:

The following two facts about the level of nerve damage at the time of polio are important to take into consideration:-

A) The first descriptions in medical literature appeared in 1875 when 4 case histories were reported in the French literature by Carriere, Raymond, and Cornhill & Lepine. Their patients, all young men, had paralytic polio in infancy and developed new weakness not only in previously affected muscles but also in muscles not believed to have been involved. They all had physically demanding jobs and performed repetitive activities. Click here to view full article

B) Professor WJW Sharrard in 1955 reported that ‘Motor cell destruction was always much more severe than would have been expected.’ One case in which there had never been any demonstrable weakness in any muscle in the lower limbs had suffered losses of up to 40 per cent of the normal number of cells in some cell columns.  Click here to view full article

These demonstrate that there were considerable levels of damage below which weakness was not clinically evident at the time of the diagnostic examination and that it is possible for polio survivors to have new issues in area of their bodies previously not affected by weakness.

There is NO set pattern of nerve damage. Damage to the nerves from the virus varies in level and area(s) of the body. Dr. Marinos Dalakas likened it to standing polio survivors in front of a white sheet, throwing a bucket of black paint at them and at the same time hitting a wind machine with millions of settings, a different one for each person. With the polio virus having no set pattern of damage to the body makes it much more challenging for health professionals. See cover of Newsletter Volume 5 Issue 5

Simply, a muscle has a number of nerves supplying it to work. The polio virus kills and damages nerves and the resulting ability depends on the numbers remaining. Recovery was possible because nerves that were not affected grew extra (axonally sprouted) nerve endings that re-innervated some muscle fibres that had lost their nerve supply. The slide below is from one of Hilary Boone’s PowerPoint presentations – See also LincPin Volume 5 Issue 5 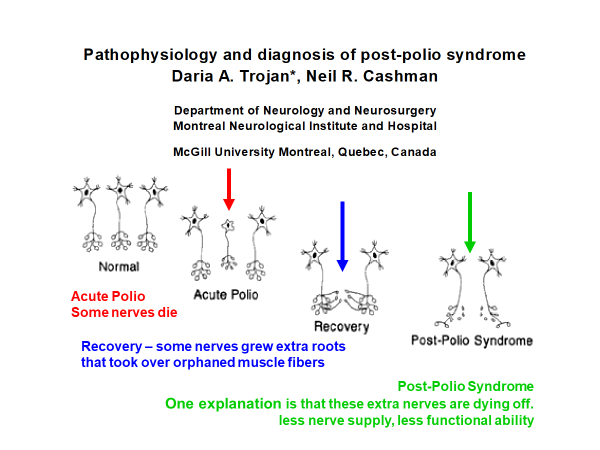 Terminology
There are a variety of terms that have been used in medical articles over the last three decades. Unstable polio, late effects of polio, post-polio muscular atrophy, post-polio sequelae and post-polio syndrome. In last few years post-poliomyelitis syndrome has been added as ICD 10-GM G14 , Click here to view article

The late effects of polio encompasses anything happening after having polio that is affecting how the polio survivor is managing.

2. A period where we recovered

4. New symptoms for which there is no other explanation of :-

a) fatigue often overwhelming, both physical and mental

c) pain in muscles and joints

For an English article written by Doctors for Doctors that our UK members have found is accepted by most NHS professionals see Patient.co.uk Post Polio Syndrome – https://patient.info/doctor/post-polio-syndrome

For several decades there had been a tendency to require a history of paralytic polio before any diagnosis of PPS will be considered. Such a pre-requisite is not supported by medical papers written in the 1950’s and earlier that report evidence of a level of neuronal damage by the polio virus that does not present with any clinical signs of paralysis at the time of infection. Hence, a history of non-paralytic polio does not preclude new PPS symptoms or a diagnosis of PPS when all other possible conditions have been excluded.